Newton Harrison (b.1932) is a pioneer eco-­‐artist based in California who has turned art into a weapon for the environmental cause. He and Helen Mayer Harrison have created numerous exhibitions and large-­‐scale installations across the world. Part of the 1971 exhibition at the Hayward entitled 11 Los Angeles Artists, Harrison loaned the Portable Fish Farm to demonstrate and celebrate a sustainable food source. harrisonstudio.net

Lord Arnold Goodman (1915-­‐1995) – a lawyer with friends in high places – was Chairman of the Arts Council of Great Britain from 1965 to 1972 – a period which, thanks also to the support of Jennie Lee (Arts Minister), is widely regarded as the golden age. He was an advocate of wider access to the Arts, and was especially fond of opera. The Hayward Gallery opened in 1968 and was managed by the Arts Council.

Spike Milligan (1918-­‐2002) was a celebrity, comedian, writer, actor and campaigner, best remembered for ground-­‐breaking radio series, The Goon Show, which he wrote and starred in. His headstone bears thefollowing inscription (in Irish): “I told you I was ill”.

Catfish are widely caught and farmed – particularly nowadays in the southern US, where it is a popular food. In the UK, catfish are marketed under pseudonyms so as not to offend Britsh sensibilities. Rather than being able to sing, catfish are great percussionists.

The Catfish sings voluptuously of her wonderful existence at the bottom of a river. Suddenly, Harrison catches her and transports her across the ocean to a tank in the gallery. Reading the paper, Goodman learns about the exhibition and rushes over to the gallery to find out what is going on. There he encounters Milligan, angry that catfish are to be electrocuted and devoured at a feast: “Is this humane?”. Harrison explains that art is defined by the artist and cannot understand why there should be any fuss. The Catfish sings a plaintive prayer – “Sanctus” – while the argument between the others grows more heated. Milligan mocks the death sentence – “Catfish on death row” – then launches into a brief aria about frying fish: “If the Arts Council fries fish tonight”. Taking no notice, Harrison prepares the death chamber and his filleting knives – “Moments when reality” – then sings of the importance of his work in a fugue which is mocked by the others: “My work begins”.The proceedings are halted while meetings are held; the feast is postponed. Goodman is less worried about animal rights than the degradation of art: “Are we doing the right thing?”. Finally, the feast is given the go-­‐ahead, provided that the slaughter is not shown to the public. As she sings the Lord’s prayer, the Catfish is led to her execution and filleted. President Reagan, in so far as he is capable of coherent speech, declares 25 June 1987: National Catfish Day. 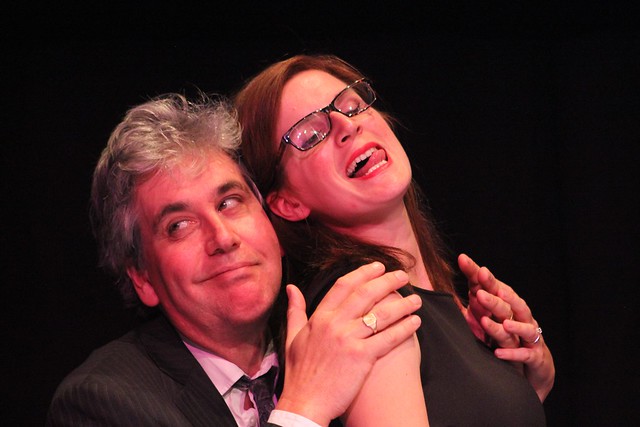 Donna Lennard, following studies at GSMD, participated in ENO’s Opera Works 2012/13. Opera roles include: Eurydice Orpheus in the Underworld and Frog/Ensemble How the Whale Became (ROH), Frasquita Carmen and Alice Airborne (Nova Music Opera), and Susanna The Marriage of Figaro and Pamina The Magic

Joanna Gamble has sung with most of the major British opera companies, specialising in character mezzo roles such as Filipyevna (WNO) and Dame Quickly (Scottish Opera and WNO). Developing into a dramatic mezzo, this year she has performed Grimgerde Ring and in September sings Klytemnestra Elektra for New London Opera Players. mmartists.co.uk

Alistair Shelton-­‐Smith is in demand, across Europe, as a singer of contemporary and twentieth-­‐century opera. Recent performances include: Eddy Greek (Music Theatre Wales at the ROH Linbury Studio) and Title Role Owen Wingrave (Opera Trionfo). alistairshelton-­‐smith.com

Mark Beesley made his professional singing debut in 1987. Since, he has sung as a principal for many of the major opera houses including: ROH, ENO, WNO, Glyndebourne, Le Chatalet Paris, La Fenice Venice and Gran Teatre del Liceu, Barcelona. He has recorded for Solti, Downes and Robert Craft, among others.markbeesley.com

Max Ruisi is an award-­‐winning, young British cellist based in London. Founder of the Ruisi Quartet and Principal Cellist of the 12 ensemble, Max is a dedicated chamber musician, having performed at major concert halls throughout Europe, including a performance of the Kodaly Duo at Wigmore Hall.

David Edwards is a freelance director, writer and presenter. He has directed opera around the world and previously, for Tête a Tête, Will Todd’s The Screams of Kitty Genovese (2010), which subsequently ran at the Edinburgh Festival Fringe. David is Production Director for The Mastersingers.davidedwardsopera.com

Edward Lambert has composed for a wide variety of performers. Previous operas: Caedmon (ROH/Donmar), All in the Mind (W11/Britten), The ButtonMoulder (ROH/schools), Six Characters in Search of a Stage (Brighton Fringe and London venues earlier this year). He has also written numerous choral and chamber works. edwardlambert.co.uk