This work explores gender identity, outing, passion, anguish, madness, and the desire to live and to be ourselves. Because although life can be difficult, confused and obscure, it must be free. Deeply: deeply free, deeply ourselves.

Created by Italian Director Federica Santambrogio, Deeply explores the struggle of living life without the constraints of confirming to stereotypes and norms, the endless search for freedom, and the challenge of finding one’s place in the world. This work covers a wide range of topics: love and death, gender identity, outing, passion, anguish and, above all, the desire to be, ultimately, deeply ourselves.

The two performers, a soprano and actor, together with five cellists, tell a compelling story about life; life that can at times be bewildering and uncertain, but nonetheless should be lived freely. 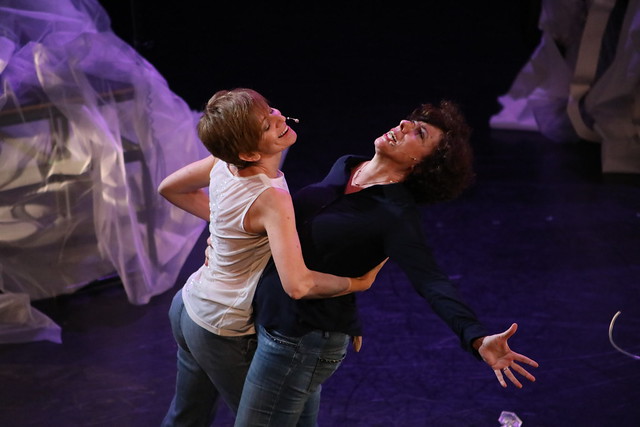 Translation from the Italian into English: Margaret Rose

Translation from the Italian into English: Margaret Rose

Matteo Manzitti studied composition at the Giuseppe Verdi Conservatoire in Milan, Matteo Manzitti and then continued his studies in Florence and Lugano. He has composed several original works for Cremona Quartett, Cameristi della Scala, Ensemble Conducts, Ensemble Sentieri Selvaggi, Turin Philarmona, and the Carlo Felice Choir. He has also composed many contemporary operas.

Daniela Morelli is an author and playwright, Daniela Morelli attended Paolo Grassi School for the Dramatic Arts in Milan and eventually embarked upon a rewarding career as an actor. In recent years she has published several major prizewinning childrens’ books as well as writing plays and operas.

Pilar Bravo started studying piano in her native Spain. After graduating in piano and pedagogics her focus turned to conducting and she later became a choir conductor. In 1996 she moved to Italy to develop her skills further as a conductor. She has worked with several choirs and orchestras such as Teatro Lirico Orchestra in Trieste, Cantelli Orchestra in Milan and BCN Sinfonietta.

Frederica Santambrogio was born in Milan, after graduating in theatre history and performing arts, Federica attended the world famous Teatro alla Scala Academy, where she studied to be director. Since then, she staged several works such as Tosca, Madama Butterfly, Cavalleria Rusticana, to name but a few. She has worked at Piccolo Teatro Strehler and Teatro Franco Parenti in Milano.

Laura Catrani graduated in opera studies at the Giuseppe Verdi Conservatoire in Milan subsequently beginning her career focussing on contemporary repertoire. Laura has starred in world premieres such as Il dissoluto assolto by Azio Corghi (Teatro La Scala – Milano), Leggenda and Il suono giallo by Alessandro Solbiati. She has also worked with famous conductors such as Stefan Anton Reck, Gianandrea Noseda, Fabio Biondi, amongst others.

Allesandra Faiella made her stage debut in the early 1990s and has worked as an actress in theatre, television and cinema. Thanks to her talent and great sense of humour, she rapidly became one of the most famous and funniest comedy actors in Italy. In the last ten years Faiella has also embarked upon a successful career as an autho as well as teaching acting. However, she still relishes the opportunity to entertain audiences by performing both on television and on stage.

A Time of Empty Tales