“In the fog of a Paris dawn in 1832, Évariste Galois, the 20-­‐year-­‐old founder of modern algebra, was shot and killed in a duel. That gunshot marked the end of one era in mathematics and the beginning of another. The eighteenth-­‐century mathematicians were idealized as child-­‐like, eternally curious, and uniquely suited to reveal the hidden harmonies of the world. But in the nineteenth century, brilliant mathematicians like Galois became Romantic heroes like poets, artists, and musicians. The ideal mathematician was now an alienated loner, driven to despondency by an uncomprehending world” – Duel at Dawn, Amir Alexander.

“ÉVARISTE, commissioned by The Courtauld Gallery and Guildhall School of Music & Drama(GSMD) in September 2012, is based on the last three years of the life of French mathematician Évariste Galois, who died in 1832 at only twenty years of age – the same year that another great Frenchman was born, Édouard Manet. The influence of Manet, the combination of realism and impressionism, as displayed at the time in Courtauld´s Wolfson Room, can be found in the music. I set out to write sets of motifs; sets representing a real-­‐life sound transcribed into an inconspicuous musical context. I call these sets of motifs ´The Pen´ and ´The Clock´. They appear in ÉVARISTE where our protagonist is working/writing against the clock. They are composed of particular polyrhythms, varying string harmonics, tremolos and low flutter-­‐tongue flute/piccolo” – Helgi R. Ingvarsson.

Évariste Galois, a hot-­‐headed twenty-­‐year-­‐old mathematical genius, is sitting at a desk in his room, feverishly writing. His great passion, maths, has been sabotaged by his first crushing experience of love. Now, he is more fervent than ever about being understood, being important, being accepted.

Frustrated with an illogical world, Évariste will embrace early death by duel in fourteen hours, as long as he completes his ground-­‐breaking theorem, where the only remaining beauty resides.

As he starts a goodbye letter to his friend, Auguste, explaining both his work and grave situation, memories of past events – his failed examination at the Polytechnique institute and his short time with Stéphanie du Motel– start to haunt him.

The opera is based on real events. 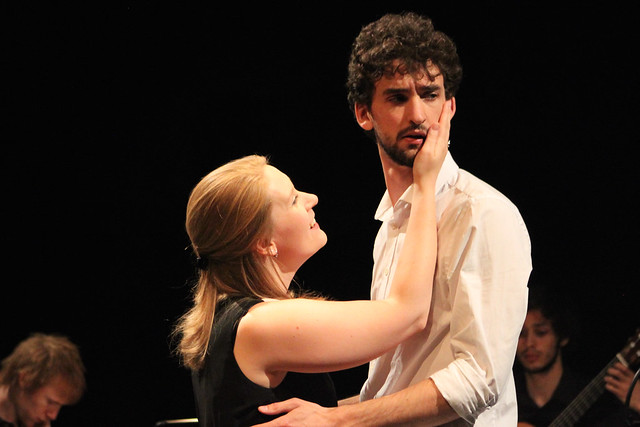 Helgi Rafn Ingvarsson is an Icelandic composer, conductor and singer, currently pursuing an MPhil/DMus degree in composition at the GSMD, supported by the Guildhall School Trust, where he was awarded a Fellowship in 2012. Helgi has written three chamber operas: ÉVARISTE (2014), Bráð (2012) and Skuggablóm (2007). www.helgiingvarsson.com

Lori Ann Stephens is a librettist and novelist. Her novel Song of the Orange Moons was endorsed by Pulitzer Prize winner Robert Olen Butler, her second book, Some Act of Vision won the 2013 National Readers’ Choice Award for Young Adults (RWA). In 2012, Lori Ann’s libretto won the ENO MiniOperas competition.

Shirley Keane´s experience ranges from traditional and contemporary opera to mainstream theatre, having trained in both theatre and opera at Rose Bruford College, GSMD and the Royal Academy of Music. A Fellow of the Higher Education Academy, Shirley is on the teaching staff of GSMD.

Friðþjófur Þorsteinsson (Fiffi) is a performance lighting designer and theatre consultant at Theatre Projects Consultants. He is a graduate of both the Royal Central School of Speech and Drama (2009) and the University of the Arts London (2013).

Michelle Marie Santiago holds a Doctor of Music from the Université de Montréal. Presently, she continues her studies at GSMD under Pamela Lidiard and Eugene Asti, with the support of a grant from Canada Council for the Arts. www.mmsantiago.com

Jonathan Hyde was a choral scholar in the Choir of St John’s College, Cambridge before attendingthe GSMD on a scholarship in 2014. He currently studies singing under Robert Dean, and is generously supported by The Kathleen Trust, The Seary Charitable Trust and Ryan Davies Memorial Fund.

Freya Jacklin is studying on the MPerf course at GSMD under Theresa Goble. Career highlights include solos in Stockhausen’s Mittwoch aus Licht (Birmingham Opera Company), film soundtracks (including Interstellar) and a recent performance at the Wigmore Hall, as part of the Voiceworks series. Upcoming and recent roles:

Callie Swarbrick is currently studying under Theresa Goble at GSMD, supported by the Stapley Trust, The Seary Charitable Trust and a Guildhall School Scholarship. Callie is a member of the Core Company for Opera Erratica, nominated Critics Choice in the Times. Callie is a principal artist with Opera Holloway. www.callie-­‐swarbrick.co.uk

Christian Valle is a bass-­‐baritone from Trondheim, Norway. He is currently studying for a BMus degree at GSMD, under Robert Dean.

Jack Holton (baritone and actor) is currently in his third year at GSMD. Jack is enjoying increasing his repertoire of new theatrical and operatic work, having also performed as Vulture inBoys of Paradise at Tête a Tête: The Opera Festival 2015, earlier this month.

Jenni Hogan specialises in contemporary and improvised music. She recently performed on BBC Radio 3, Resonance FM and BBC1, and at festivals including Darmstadt, Sounds New and London Ear. Recent chamber highlights include performances with Decibels, FLAME, the South Iceland Chamber Choir and ANIMA.

Julian Vickers is currently studying for a Masters in Guitar Duo at the Royal Academy of Music. He has a keen interest in new and contemporary music and frequently performs and commissions new work written both for him and the Vickers Bovey Duo.

Andrew Power plays the cello, trained at the Yehudi Menuhin School andGSMD and has recently been awarded a place to study at the Royal Danish Academy of Music. He has performed a wide range of repertory, ranging from new experimental theatre to concert works such as Thomas Adés’ Lieux Retrouves.