THE HIDDEN VALLEY was commissioned by WNO MAX and has grown from the stories, people and landscape of the Welsh Valleys. It is a development of Richard and Alan’s community opera, The Journey, created from WNO MAX song-­‐writing projects across the Valleys, supported by the Paul Hamlyn Foundation. THE HIDDEN VALLEY was developed with workshops by WNO chorus members and features a chorus role specially written for Juice Vocal Ensemble. (Richard Barnard)

Midsummer’s day. Young Dewi sings and is heard by river maiden Ariene. They fall in love. Her father, the river god Modred, forbids their love. He casts a spell on his daughter and she disappears. If Dewi can find Ariene, he can marry her. Modred has changed Ariene into a different animal each year. Modred tells the Crow that long ago he married a human. She did what all humans do; she died. He doesn’t want the same heartbreak for his daughter. Years pass. Dewi meets a woman desperate for a wedding. He is tired and accepts her offer. Ariene thinks she has been betrayed. An older Dewi is burying his “bride”. Ariene (now a wren) sings to him. He realises the secret. Modred offers Dewi a deal: Dewi can spend a year with Ariene in the form she is now, but then he will die. Dewi agrees. He is transformed into a salmon and joins Ariene in the river. Modred realises that the power of love has stripped him of his kingship – his crown must move to Dewi. It’s the only way that Ariene will avoid the heartache he suffered. Modred is now powerless and alone. The Crow advances… 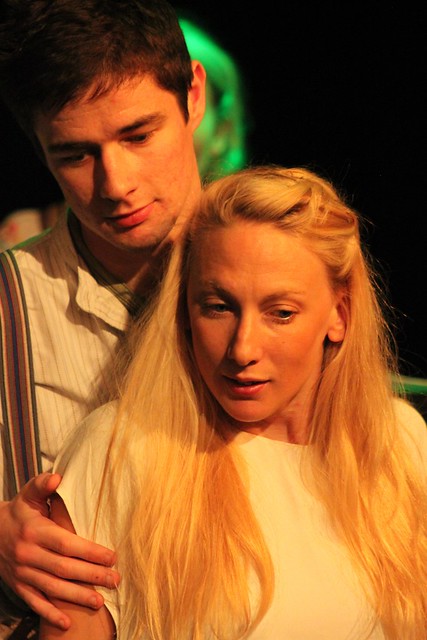 Richard Barnard’s music has received performances by BBC Singers, Delta Saxophone Quartet, Bristol Cathedral Choir and others. He is guest lecturer at Bristol University and co-­‐founded the new music project Elektrostatic at the Colston Hall and Arnolfini. He leads education projects with groups including Eighth Blackbird, WNO and Opera North.

Alan Harris’ plays include: A Good Night Out in the Valleys, contemporary dance opera Manga Sister, and The

Dafydd Hall Williams has worked as an Assistant Director for Welsh National Youth Opera (The Sleeper), Mid Wales Opera (Don Giovanni), and RAM (Eugene Onegin). He was Staff Director with WNO on Lohengrin and Lulu. He staged Acis and Galatea and Dido and Aeneas for Opera’r Ddraig, and The Magic Flute for Opera Mint.

James Helps. Design credits include TV series for BBC Wales and BSB/Sky, and the first season for Shakespeare at the Tobacco Factory. He won the Peacock Award during a season at the Lyric Belfast and was Head of Design at the Nuffield (Southampton) and Arts Theatre (Ipswich), and Resident Designer at Theatre Clwyd.

Welsh Baritone Meilir Jones is studying at the RWCMD. In 2012, he received a Study Award from the Bryn Terfel Foundation. Concert highlights include: Bass Soloist for the first performance of Handel’s Messiah at the WMC, a concert as part of Brynfest at the Southbank Centre, and Soloist in the BBC Radio Cymru Christmas Concert.

Tom Lowe is a London-­‐based tenor. He studied at the Guildhall School of Music and Drama, and for a Masters Degree at the Royal Academy of Music, and is much in demand as a choral and operatic soloist.

Juice are an experimental vocal trio whose debut album Songspin (Nonclassical) won an International Music Award in 2012. They were the first UK prizewinners at the Tampere Festival, and have performed at Austin’s SXSW, Wigmore Hall, the Southbank Centre and Latitude Festival. Collaborators have included: Shlomo, Micachu and Gavin Bryars. Anna Snow recently performed as the solo vocalist on Tansy Davies’ acclaimed album Troubaritz (Nonclassical). Sarah Dacey appeared in Tales of Our Fathers by Ben Park/Ian McMillan at last year’s Festival. Trained at the RAM, she performs regularly with the BBC Singers, Philharmonia Voices and Octandre Ensemble. Future projects include a concert of the neglected works of Barbara Strozzi with early music ensemble Ursula’s Arrow. Kerry Andrew is a composer and performer. (Her own work, Dart’s Love, is being performed later today!) She also performs as alt-­‐folk artist You Are Wolf, and sings with jazz groups Metamorphic and DOLLYman. She won a British Composer Award in 2010, and was Handel House’s Composer-­‐in-­‐Residence in 2010-­‐12.

Alexei Winter is a tenor based in the South West. Originally trained in aerospace engineering at Bristol University, he sang as a lay clerk at Bristol Cathedral and now sings regularly as a professional soloist.

Michael Lowe currently studies voice at the Royal Welsh College of Music and Drama and is returning to Tête-­‐à-­‐ Tête: The Opera Festival this year, having played Sam in Welsh National Youth Opera’s The Sleeper in 2011, a role he’d previously created in Cardiff. 2013 performances include Javert Les Misérables.

Manos Charalabopoulos is a performer, composer and director. He has performed in venues across the UK (Bridgewater Hall, Colston Hall) and Greece (Megaron Moussikis). In 2011, he directed the music of Sweeney Todd at Pembroke College (Oxford), where he graduated with a BA in Music. He looks forward to completing his MA in Composition (Bristol), before moving to Paris to concentrate on performing.

Julia Hammersley studied with Imogen Barford (professor of harp at the Guildhall, London). Julia has continued to play in orchestras and regularly plays for Bristol Concert Orchestra, New Bristol Sinfonia, and Brunel Sinfonia.

Brought up in Wales, George Jones won the Junior RWCMD Principal’s Prize for two consecutive years before reading Music at the University of Bristol. Much in demand as an orchestral percussionist and Jazz drummer, George comes to this production hotfoot from a successful run at the Edinburgh Festival.