Minerva Scientifica: The Franklin Effect (a work in progress)

RADA Studios, Chenies Street, London WC1E 7EX and then to a secret location!

Minerva Scientifica is an evolving music-­‐theatre programme reflecting the lives and work of British women scientists told through the music of British women composers. This electric voice theatre initiative sets out to look at the links that exist between women scientists both in history and the present day, and to find ways of increasing public engagement with the physical science and with the issues encountered by expert female scientists through a parallel exposure to women composers and artists. THE FRANKLIN EFFECT is in development at King’s College London, under the mentorship of Judith Weir (Master of the Queen’s Music), inspired by Rosalind Franklin (molecular biologist, crystallographer), whose photo 51 was the key to unlocking the mystery of the structure of DNA. Her work is re-­‐spawned through contemporary women scientist and composer collaborations. Minerva Scientifica will appear at Edinburgh Festival Fringe (18-­‐23 August), with future projects at Cambridge and Newcastle Universities.

THE FRANKLIN EFFECT (work in progress) for vocal quartet (30mins) is a set of variations on the theme of Rosalind Franklin, interspersed with Soundscapes about women scientists. 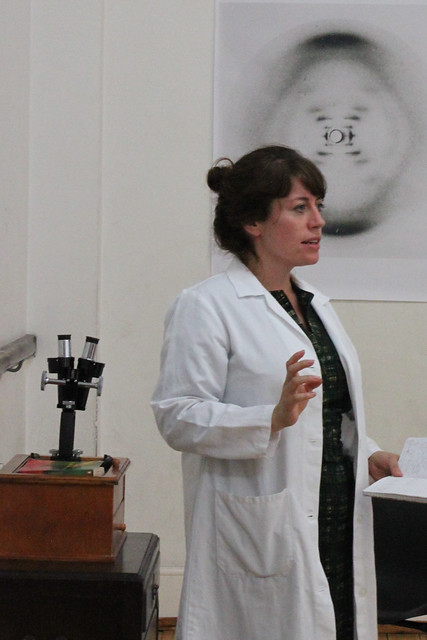 Frances M Lynch – Artistic Director of electric voice theatre – has pursued an international career in contemporary vocal music, specialising in music-­‐theatre, electronic music, opera, and chamber music. She has also sung Scottish Traditional, Pop and Rock music and made performances with art exhibitions, including one by Tracey Emin.

Lynne Plowman’s compositions encompass intimate songs, solos and chamber music, as well as large-­‐scale theatrical pieces. She has been honoured with a British Composers Award, commissioned by Music Theatre Wales, Welsh National Opera, Glyndebourne and BBC National Orchestra of Wales, and has been developing new directions with Sir Harrison Birtwistle.

Cheryl Frances-­‐Hoad, BBC Young Composer 1996, has won numerous awards worldwide. She studied at King’s College London, was recently Music Fellow at Rambert Dance, and has created work with the Psychiatry Department, Cambridge. The Cardinall’s Musick premiered Cheryl’s From the beginning of the world in the Chamber Proms this season.

Shirley J. Thompson’s music is performed and screened worldwide, winning many awards. She isa Reader in Music at Westminster University, has served on national arts panels (Arts Council England) and been named one of Britain’s most influential black people. Her opera Sacred Mountain was premiered earlier in this festival!

Kate Whitley is a composer and pianist. She has been awarded a 2014 Borletti-­‐Buitoni Trust Award, a 2013 Sky Arts Futures Fund Scholarship, and was 2013-­‐4 Music Fellow at Rambert Dance Company. She is the co-­‐Artistic Director, with conductor Christopher Stark, of The Multi-­‐Story Orchestra which is based in a Car Park in Peckham.

Miranda Melville studied at the Motley Theatre Design Course with Percy Harris, and designs extensively for theatre (including Bobby Baker’s How to Live, Barbican Theatre), opera (including Britten’s Owen Wingrave), film (including the Cholmondeley’s and Featherstonehaugh’s Cross Channel) and dance (including work with V-­‐TOL). She co-­‐designed a gold medal-­‐winning garden at Chelsea Flower Show.

Penny Desbruslais has performed in London’s most prestigious venues and is a workshop leader passionate about the creative power of participatory music (Spitalfields Music, Wigmore Hall and BBC Symphony Orchestra). In 2013, she founded early years’ music company Blackbird Music.

David Sheppard specialises in contemporary and early music and has sung with English National Opera,Welsh National Opera, and many choral societies throughout the UK, as well as for the BBC and HBO. He runs a voice teaching practice and is a qualified clinical masseur and reflexologist.

Julian Stocker is a member of the Choir of Westminster Abbey, appears regularly with the BBC Singers, The Tallis Scholars, The Sixteen, The Geoffrey Mitchell Choir, Opus Anglicanum and European Voices under Sir Simon Rattle, and has sung for the Bournemouth Sinfonietta, Holland Park Opera and The Cardinall’s Musick.