“This pair of works came about through my involvement in Creative Speech Technology Network (CreST), created by Chris Newell. They represent different aspects of what opera might be – not without language, which I have done before – but without a voice. The voice has been at the epicentre of much of my work as a composer and through CreST I encountered some of the challenges many have who have no voice of their own. Technology offers them some extraordinary possibilities, but its limitations also serve to remind us of what an extraordinary and sophisticated tool our voice is. MY VOICE AND ME gives voice to a singer who has lost his own, and OF ZOE AND THE WOMAN I SING shows how an artist who loses his muse might try to capture her voice, which he so depends upon, with consequences he might not have foreseen” – Paul Alan Barker.

MY VOICE AND ME is a biographical sketch of Oliver Curry, an English tenor who lost his voice as a result of rehearsing the famous opera I Pagliacci in Naples a few decades ago. His experience was so traumatic that he lost his voice and became unable to make any sound at all, permanently. He tells his story today with the aid of a synthetic voice whilst simultaneously playing the piano. The story has a positive ending, because he met his future wife at those ill-­‐fated rehearsals, the soprano Maria Bovino. Maria makes an unexpected guest appearance towards the end of the work.

OF ZOE AND THE WOMAN I SING (world premiere) explores the relationship between an artist and his muse. In Act I, actor Zoë Lister seems to have an ideal relationship as the muse of an artist, at the piano. But they argue, inevitably, and she walks out. In Act II, he has turned her into a talking head or avatar, the better to control her, he thinks. The avatar speaks with a uniquely ‘emotional’ synthetic voice developed by Toshiba Research Europe Ltd along with myself and Zoë Lister, on whom the avatar is modelled. We call Zoë’s avatar Zoe. Toshiba call it Xpressive Talk (TM), and designed it specifically to emulate any human emotion. For the avatar Zoe, I wrote the words she speaks and then chose the specific emotions withwhich she delivers each of her lines. In ActIII, Zoë returns to the stage with her avatar and the artist, in a trio. Their strange triangular relationship leads to an unexpected and revealing ending.

The starting point for Paul Barker’s double-bill is how to do opera without a voice. Not just a singing voice, but without any voice at all. My Voice and Me is the autobiography of Oliver Curry, an English tenor who lost his voice as a result of rehearsing I Pagliacci in Naples many decades ago; it left him voiceless, unable to make any sound. He tells the story today with the aid of a synthetic voice (which sounds uncannily like Stephen Hawking) whilst simultaneously playing the piano. Oliver’s wife, soprano Maria Bovino, makes an unexpected guest appearance. Of Zoê and the Woman I Sing explores in three acts the relationship between an artist and his muse. Actress Zoê Lister is that muse whom the artist turns into an avatar, the better to control her. The avatar speaks with a unique synthetic voice developed by Toshiba Europe along with Paul Barker, modelled on Zoê, designed to emulate any human emotion. Barker has composed many operas exploring different languages and his most recent, El Gallo, is an opera for six actors and two string quartets without text. It has been performed across several continents with over 100 performances and has won several awards. His exploration of opera now returns to language but dispenses with singers and expects instrumentalists to act.

You can read more from Paul Barker on the creation of Of Zoê and the Woman I Sing here, and see more about the performances of My Voice and Me in our 2013 Festival here. 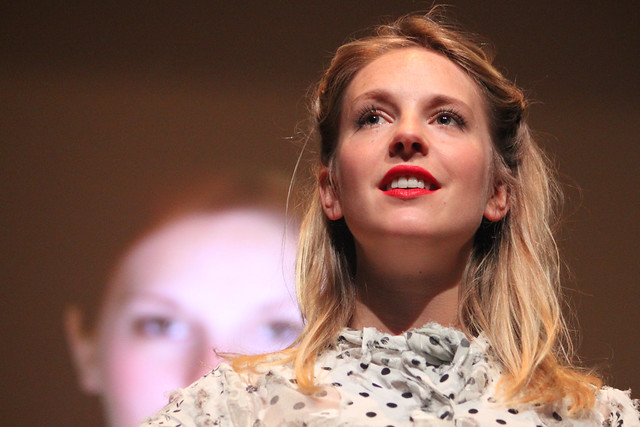 Of Zoe and the Woman I Sing
Music & Words: Paul Alan Barker

My Voice and Me

Of Zoe and the Woman I Sing
Music & Words: Paul Alan Barker

Paul Alan Barker is a composer of seventeen operas performed, recorded and televised internationally, as well as several prizes. Commissions include: the London Festival Orchestra, Sarah Leonard, Tasmin Little and the Brodsky Quartet, etc. He has also been commissioned to write for theatre and contemporary dance. Paul is a writer, pianist and stage director. His book Composing for Voice was published by Routledge in 2004. He is Professor of Music Theatre at the Royal Central School of Speech and Drama.

Chris Newell is an opera director with an interest in computer-­‐generated speech. He invented the Creative Speech Technology Network, which has done pioneering work in the use of speech technology in creative projects. www.chrisnewell.eu

George Newell is a freelance writer living in Norwich.