The script for OPERA WITH A TITLE has been extracted and freely arranged from two plays by Lorca,El publico and Comedia sin título; they are considered ‘impossible’ plays, an experimental theatre of the imagination and of the sub-­‐conscious, and both are incomplete. In several ways, the two plays are connected and constitute a search for a new form of theatrical expression; like many works of the period, they also call for a new morality of personal freedom. Both examine the nature of illusion and reality, confusingactors inside and outside their roles with audience members inside and outside the ‘play’. This androgyny is mirrored inthe relationships between some of the characters, with The Audience in particular containing episodes of homoeroticism. Both works also feature the character of Director/Author/Playwright/Impresario revealing the pre-­‐occupations of Lorca himself who directed a national touring company in the years of the Socialist government.

“…our identity is an ongoing performance…” (Grayson Perry)

This surrealist opera concerns a troupe of actors in the time of the Spanish Civil War. What the actors areplaying, and what is happening to them in the real world, is confused: they bring their fantasies to bear on their performances while their characters invade their own personalities. Thus, role-­‐play and questions of gender are examined, each from the other’s viewpoint, as well as the nature of theatre and its relevance to everyday life.

A performance of Romeo and Juliet has just taken place. The Spector (bass) is offended by the portrayal of Juliet by a male. Federico, the Director (mezzo-­‐soprano) defends his desire to re-­‐invent the theatre and portray the realities of the world outside. A rehearsal gets underway, featuring characters from Shakespeare; Sofia, the company soprano plays Puck who’s in love with Oberon, played by the tenor, José. They argue, however, and the latter falls for the Spectator who invades the stage and joins in the love-­‐making as Julius Caesar. Meanwhile, Manuel (baritone), a stagehand, declares his love for the Director who is threatening to give up the theatre. His passionate protestations are not reciprocated and, wearing an ass’s head, he sings a Spanish ballad about

the qualities of masks. Shots are heard and news arrives that a revolution has broken out; the troops are heading their way. For the Director, it is time to bring the theatre crumbling down. Sofia fears for the safety of her children. José is for the rebels, while the Spectator is revealed as a fascist. Manuel re-­‐starts his song and, as tensions rise, the Spectator gets out his pistol. He is about to shoot at José but the Director steps between them and is killed. The theatre is bombed and all is dark. Sofia as Juliet welcomes the Three Wizards on White Horses into her tomb-­‐like bed but, tired of their romantic serenading, insists on taking the lead; this erotic scene evaporates at dawn. As the dust settles and daylight returns, Manuel, José and the Spectator reflect on what the drama has achieved. Sofia emerges from her tomb in a blaze of glory and the Director flies down from heaven. Now the audience can enter.

The opera is sung in English and Spanish. 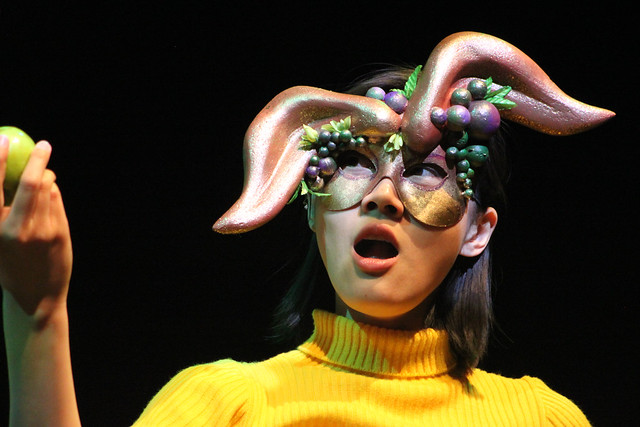 Daniel de Souza is studying on the Guildhall Masters program. Solo appearances include Mozart’s 3rd Horn Concerto, conducted by Nicholas Kraemer (Amade Players). Daniel has a busy freelance career as an orchestral player with groups including the Royal Philharmonic Orchestra, with whom he has recently toured to Switzerland and Dubai.

Lydia Hillerudh was awarded this year’s Sir John Barbirolli Memorial Prize at the Royal Academy of Music. She has played in Stockholm’s major venues, with the Tritium Trio, and performed recently at St James Piccadilly and Colston Hall.

The Music Troupe was formed in 2013, with the aim to create a repertory of genuine chamber operas in which the music and drama are tailored (not trimmed) to small spaces. www.musictroupe.co.uk