RUMBLED is the latest opera originally commissioned by English Touring Opera for young people with severe special educational needs. It follows RedBlueGreen in 2012 and Spin in 2013. RUMBLED toured the UK in Spring 2014, with performances in special schools up and down the country. It has also had a run of performances at the Philharmonie in Luxembourg. The opera has been specially adapted for Tête à Tête: The Opera Festival 2014, to appeal also to an audience of very young children and their families. RUMBLED is designed to engage directly with every member of the audience.

RUMBLED is based on the famous story of Rumplestiltskin. The King has become both demanding and threatening, and tells the girl that if she does not spin the straw first into gold, then into a rainbow, and then into the moon and stars he will cut off her head. Her only chance is Rumplestiltskin, a strange creature who, with his magic powers, helps the girl with her spinning, but then starts to become pretty demanding himself. Is there a way out for the girl? RUMBLED is highly interactive, and features lots of different multi-­‐sensory elements 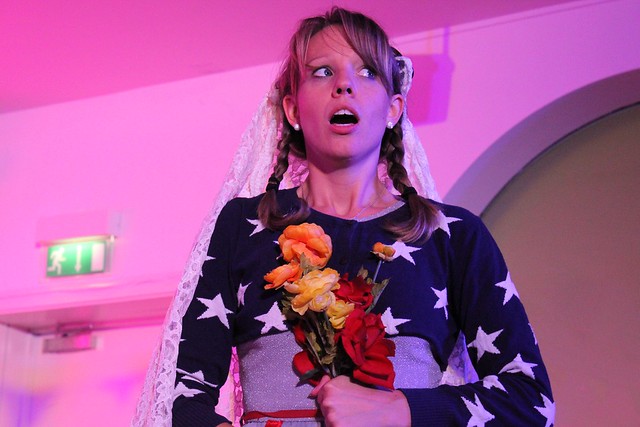 John Barber is a composer with a passion for drama, collaboration and vocal music. He won a British Composer Award for his Cantata Consider the Lilies in 2011 and an RPS Award for his opera We are Shadows in 2012. Recent pieces include a major new work for The Sixteen and new music for Much Ado About Nothing at Shakespeare’s Globe.

Hazel Gould is a writer and director, working in participatory settings. She has received commissions for libretti and choral work from Spitalfields Festival, The Royal Opera House, the Royal Academy of Music, Sinfonia Viva and Glyndebourne. In 2015, Hazel will write new pieces for Aurora Orchestra and W11, amongst others.

Tim Yealland has devised numerous projects for ETO, ENO, ROH, Glydenbourne and Opera North. He writes libretti, most recently the award-­‐winning Laika the Spacedog. He has directed many large-­‐scale, community operas, including Zeppelin Dreams in 2014. His work abroad includes Curado for Casa da Música in Porto in 2014.

Ruth Paton’s work includes designs for the RSC, the RNT, Hull Truck Theatre, Live Theatre Newcastle, BAC and the OSD, as well as community operas for Opera North, ETO, ROH, ENO, and the Wigmore Hall. This will be Ruth’s 9th children’s opera for ETO. She is currently working at the Bregenzer Festspiele.

For ETO, Lorna Bridge has appeared as First Lady Die Zauberflöte and Fiordilligi Così fan Tutte, as well as participating in education and SEN projects. Most recently, she covered the role of Ginevra at the Aix-­‐en-­‐ Provence Festival. Lorna graduated from the BBIOS and studies with Janis Kelly.

Piotr Lempa graduated from the Royal Academy of Music with distinction and from the Cardiff International Academy of Voice, where he studied with Dennis O’Neill. He also studied at the Vocal & Acting Faculty at the Music Academy in Gdansk, Poland. He performs intensively in operas in the UK, Germany, Italy and Poland, as well as on the concert platform.

Jonathan Kitchen hails from Staffordshire and has played the cello since he was seven. He studied at the Royal College of Music, winning the RCM’s Senior Cello prize. Jonathan has played with English Touring Opera for eighteen years and also freelances in London and the rest of the UK.