She said the ‘F’ Word

She said the ’F’ Word is a mostly sung through modern (yet tuneful) opera/stage piece that is a mixture of The Wonder Years and L’Enfant a la Sortileges, with a smattering of A Cunning Little Vixen. It has something of the atmosphere of these great works as well as continuing in their musical heritage. Look out for musical quotes – there will be prizes.

She said the ‘F’ Word

How is it you wake up one day with the idea of writing an opera about getting your child ready for school in the morning? Let me re-phrase that, how is it you don’t wake up….? I have often been asked, ‘Why the Homosexual Necrophiliac Duck Opera?’ My thought is – why not! Do it before someone else does. I am still surprised that no one before me thought of an opera about sexual attraction and voice pitch?

I had been researching She Said The ‘F’ Word round our breakfast table for more than 30 seconds before slinking away to the study to tinkle on the piano. It is a universal subject that unites all families in misery. A time of day hardly researched by sociologists. A Neverland where body clocks collide with breakfast. A purgatory where toilets are forever purple, damp cereal litters the lino and toothpaste tubes are grounds for divorce. No, it is not drawn from my family experience. I’ve cut the gory bits out. It is a realistic representation of what happens first thing, set to music. Perhaps it will make us look differently our own morning habits. 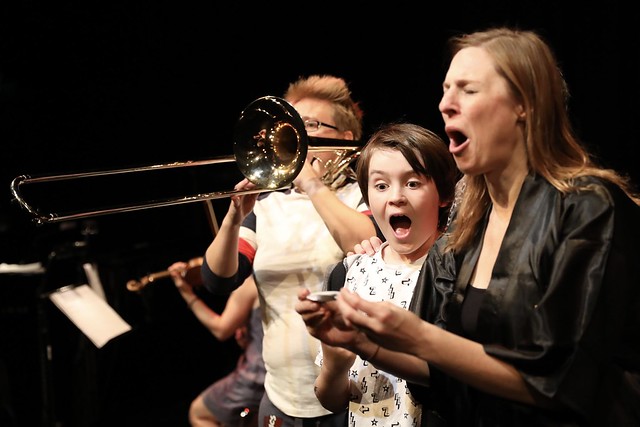 Music performed by The Edge Ensemble:

Music performed by The Edge Ensemble:

Sarah Redmond decided to step over to the dark side after 15years treading the boards. She has created many theatrical stories from large scale celebrity panto to chamber opera. Forthcoming projects include The Importance Of Being Earnest (Brockley Jack) Jack And The Beanstalk (Bournemouth Pavilion) and Merrily We Roll Along (Newbury/Brighton Festivals).

Stefan Bednarczyk has extensive London credits as musical director include at the Barbican, the Almeida, Hampstead Theatre and Open Air Theatre Regent’s Park. He has enjoyed a long relationship with the Warehouse Theatre, Croydon – composing and directing the scores for over 30 productions, including Dick Barton – Special Agent, which toured the UK for 2 years.

Cheryl Enever has sung in all the major UK concert halls and across Europe under conductors including Edward Gardner, Emmanuelle Haim and Sir Roger Norrington in repertoire from Bach to Verdi.

She has performed with Sir John Tomlinson in a programme of Verdi, Wagner and Britten for the Mastersingers.

Opera performances include: First Lady, Donna Anna and Tatiana for English Touring Opera, Violetta and Tosca at the Bermuda Festival with further performances in London and Luxembourg. For the Royal Opera House she created the role of Joanna in the Community Opera, Ludd and Isis.

Lawrence White is a London-based baritone and has performed wide-ranging musical repertoire at many major concert venues worldwide, both as a soloist and as a contributor to vocal consorts, including engagements with The Sixteen, The Tallis Scholars and Synergy Vocals. A frequent soloist in performances of standard oratorio repertoire, he has also performed more rarely heard works by, among others, Reich, Andriessen, Birtwhistle and Saariaho. Lawrence’s solo broadcast and studio recording credits include the plainchant of the Knights Templar (for Herald), Paco Peña’s Requiem for the Earth (Universal) and Mozart masses (Naxos).

Felix Gillingwater is a Chorister at Southwark Cathedral. He has played Oliver in Oliver! for Frinton Summer Theatre and appeared in Power Loss online. He is a member of Top Turns drama group.

Alice Redmond has been nominated by TMA for Best Supporting Actress in a Musical. Alice can be seen playing Mme Thenardier in Les Miserables for Pimlico Opera in October.

Numerous Theatre credits in both London and UK include: Sweeney Todd, Oliver!, The Homosexual Necrophiliac Duck, It’s Not What He Says It’s How Deep It Goes, Cats, Mexican Hayride, Alice in Wonderland, Monkey: Journey to the West, Tracey Beaker Gets Real, Carmen, Cabaret, Little Shop of Horrors and Threepenny Opera. TV and Film credits include: Consider Yourself, Ape, McCready and Daughter and Life Begins.

Ellen Campbell studied trombone under Dr Ken Shifrin. Just some areas of work she has been involved in include: As a Musical Director: Sweeney Todd (arranged for 2 pianos and cello), Treasure Island, Pirates of Penzance Rebooted (also arranger) and Smash It! As a trombonist: Love Supreme, The Grand Majestic, Lovebox, Izo Fitzroy and Studio 9 Orchestra. As a pianist: Footloose, Into The Woods, The Damsel in Shining Armour and The Calamity Jane. Ellen will be MD for Aladdin (Chris Jordan) productions this Christmas.

The Edge Ensemble is a group of musicians from Crystal Palace. They have a wealth of concert, platform, orchestral, teaching and music experience amongst them.

As an ensemble, they focus on informal concerts which have led to appearances at several festivals and venues including Kings Place, the Sydenham arts festival and SNCF.

Shaun Thompson is a clarinet and saxophone player from York. He has had a successful career playing with all the country’s leading orchestras including the L.S.O, L.P.O and B.B.C. He also worked for many years in London’s West End in shows including Crazy for You to Les Miserables.

Maude Wolstenholme is from London and is currently in her fourth year at the Royal Academy of Music where she is a recipient of the Winifred Agnes Disney Award Scholarship. Prior to Academy, Maude studied at Cheetham’s School of Music in Manchester for two years. She plays regularly with the Abingdon Quintet’ and is a member of Blues n Roots Ensemble with whom she’ll be appearing at The Albert Hall, Elgar Rooms and at Cambridge Jazz Festival.

RedWright Productions are interested in small and exciting new works. Future productions include The Importance Of Being Earnest, in association with David Ball Productions in the Autumn.

Li-E Chen: Proposition for a Silent Opera at an Invisible Museum – I am a museum.