SONATA FOR YOUTUBE is the world’s first ever piece of music composed entirely for YouTube videos. Taking John Cage’s Imaginary Landscape No. 4 (March No. 2), 1951, as its starting point, this piece is for three performers launching videos taken from www.randomyoutube.net. Although the form of the piece is set, the end result is chance, as we have no way of knowing what video will play. The results are sometimes alienating, sometimes bizarre and often very funny. 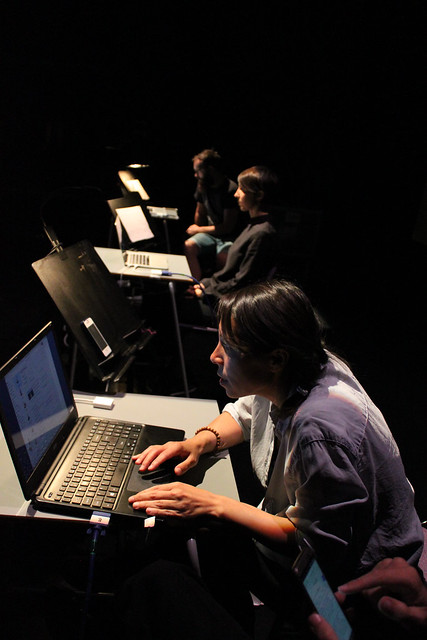 Llywelyn ap Myrddin is a composer originally from Wales but based in London. He also releases dance music as Palm2. (www.soundcloud.com/llywelynapmyrddin).

Timothy Burke is the Music Director at Tête à Tête. He trained at GSMD and the National Opera Studio, before joining the Jette Parker Young Artists Programme in 2006, and worked as Chorus Master at Opera North from 2008 until 2013. Future conducting engagements include The Barber of Seville (Opera North) and The Marriage of Figaro (Welsh National Opera).

Detta Danford is a flute player, composer and project leader whose work involves collaborating, performing and creating new work with ensembles, orchestras and within theatre, film and the visual arts. She is co-­‐founder of contemporary music ensemble Jetsam who’s most recent project explores the sonic landscape of Hackney and Walthamstow marshes in the East of London in collaboration with writer and blogger Gareth E. Rees.

Natasha Zielazinski is a London-­‐based cellist and composer. She enjoys working collaboratively in dance, theatre and the visual arts, most recently composing and touring with Kate Tempest in the theatre show Brand New Ancients. Natasha has performed at Sadler’s Wells, Southbank Centre, Barbican Centre, Melbourne International Festival and Madison Square Gardens, and teaches at the Guildhall School of Music and Drama. She leads

Joseph Wills is a musician based in London, also known as Old Man Diode (https://soundcloud.com/old-­‐man-­‐ diode). Jo also runs record label WWRecords, releasing a range of work from artists who have been influenced in some way by electronic music.