Cambridge City Opera (CCO) was founded by Sinéad O’Neill to create new operatic works inspired by people, places, and stories connected with the city of Cambridge. ON THE AXIS OF THIS WORLD is our first project, and is the result of collaboration between CCO and the Scott Polar Research Institute at the University of Cambridge.

Future plans include The Singing Line – inspired by the story of Alice Springs, a young woman from Cambridge who married the man responsible for Australia’s first trans-­‐continental telegraph wire – and The Barrington Hippo – inspired by the famous fossil discovered in the Cambridgeshire countryside.

ON THE AXIS OF THIS WORLD is inspired by Antarctic exploration and, in particular, the British Antarctic Expedition of 1911-­‐13, when Captain Robert Falcon Scott and four of his companions died on their way back from the South Pole.

The piece comprises five regions: Snow, Land, Light, Life and Sea – each a meditation on the layers of time and memory that haunt Antarctica. Together they become a shifting musical landscape in which the explorers’ words and phrases are embedded, encompassing scientific observations and personal accounts.

The texts for ON THE AXIS OF THIS WORLD are drawn from the following sources: Henry Bowers’ letter to his sister, Terra Nova’s Meteorological Log-­‐book, Terra Nova’s Ship’s Log-­‐book, Raymond Priestley’s Meteorological Diary, Victor Campbell’s Journal (all thanks to the Scott Polar Research Institute), Lester King’s The Morphology of the Earth (Edinburgh and London, Oliver and Boyd, 1962). The title is a quotation from a lecture given by Captain Scott. 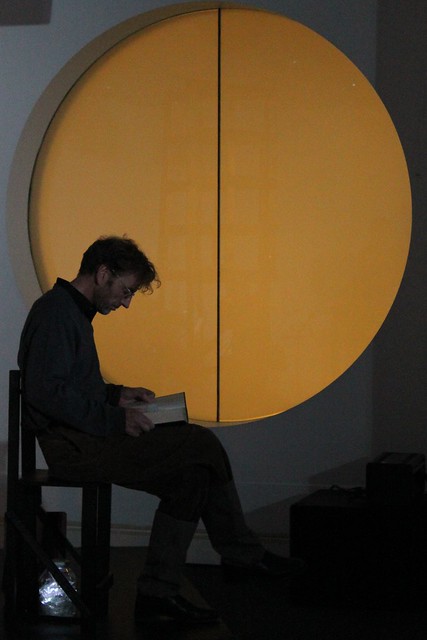 Words: verbatim from the archives of the Scott Polar Research Institute

Words: verbatim from the archives of the Scott Polar Research Institute

Matt Rogers has written for and with a host of leading instrumentalists, ensembles and technologists creating music for the concert hall, theatre and gallery spaces. He was the recipient of a Paul Hamlyn Award for Composers and has previously been Artist-­‐in-­‐Residence with Southbank Centre and Tokyo Wonder Site.

Sinéad O’Neill recently held a post-­‐doctoral fellowship with Creativeworks London, at Queen Mary University of London. This is her second collaboration with Matt Rogers, following The Raven (Grimeborn, 2010). Sinéad is currently enjoying her fourth season as an assistant director at Glyndebourne, working as Staff Director on Tom Cairn’s La Traviata.

Flora Robertson is a visual artist. Exhibitions include: Moscow International Biennale of Young Art (2012), The Yellow Wallpaper (London, 2012), Die Verwandlung (Berlin, 2011) and Steinbach & Syer (London, 2013). She created an installation at London’s South Bank Centre (‘Harmonic Series’ , 2012) and designed The Boy The Forest and the Desert (Grimeborn, 2011).

Emily Bestow is a Performance Design and Practice student studying at Central Saint Martins, about to begin her final year. She has previously worked at the Sage Gateshead with Samling Academy Opera and at The Roundhouse on CircusFest. After graduating, her aim is to work as a set and costume designer.

Gary Merry is a founder member of The New Factory of the Eccentric Actor, with performance work ranging from the London Fringe to weekly rep. Most recently, he directed The Last Days of Limehouse (Yellow Earth) and Tonseisha – The Man Who Abandoned the World (saltpeter, Tête à Tête: The Opera Festival 2014).

Tom Jackson is a clarinettist and saxophonist based in London, largely dedicated to contemporary classical music and free improvisation. He maintains an extensive and eclectic performance schedule and is a proud member of Cram Collective (Mumbai and London), Squib Box (London) and One Moment Free Improv (Belgium). www.musictomjackson.com

Bartosz Glowacki is a leading light of a new generation of accordionists who’s goal is to improve awareness of the accordion in classical music and develop a new repertoire for his instrument. Winner of Polish Young Musician of The Year 2009, he currently studies at the Royal Academy of Musicwith Professor Owen Murray.

Corentin Chassard studied in St-­‐Malo, Paris and London, and is now a London-­‐based chamber musician. He is a member of the Mercury Quartet, the cello and laptop duo, Partial Gathering and the Octandre Ensemble. He is also the official cellist in Europe for Japanese violinist and composer Taro Hakase.

The Dorty Letters of James Joyce