Fossils and Monsters presents the tales of Mary Anning and Mary Shelley – both living in the 19th century but from very different backgrounds; both experts in their field but largely unrecognised in their time. Alison Wells performs Mary Anning by Judith Bingham and Science Fictions by Colin Riley, framed by extraordinary pieces for clarinets played by Ian Mitchell and Catriona Scott.

I commissioned Judith Bingham to write a solo voice piece for me in 2012. She had long been interested in Mary Anning and wrote the libretto herself, setting the piece on the beach. Colin Riley’s new electronic-­‐track version of Science Fictions seemed the ideal piece to set alongside this; the parallels between his protagonist (Mary Shelley) and Mary Anning are striking. The clarinet pieces frame the two vocal pieces and bring a different colour palette.

The show begins with fanfares from two E flat clarinets. As the music dies down, we see a lone woman walking on Lyme Regis beach with her basket, collecting fossils. This is Mary Anning. Still busy with her work, and perhaps resenting the intrusion of visitors to the beach, she tells the story of her desperately poor background: her life of hard work as she supported her family after her father’s death, her religious beliefs, her amazing discoveries in the cliffs of the Jurassic Coast, and of her ultimate loneliness. William O. Smith’s experimental music for two clarinettists forms the bridge into the story of another Mary – Mary Shelley, the writer. Living at the same time as Mary Anning, Shelley came from an educated and liberal family. We find her alone in her library; during another sleepless night, she looks back on her life, describing her all-­‐too-­‐brief marriage to Percy Shelley, his death in Italy, and the origins of her novel, Frankenstein. Her grief is raw and painful, but by the end of the piece, she has regained her composure as she faces the new dawn. 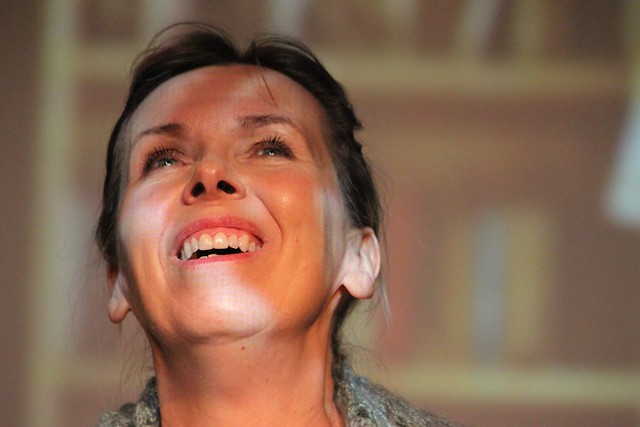 Alison Wells is well-­‐known as a dramatic and committed interpreter of new works. She has given many premieres and has made dozens of recordings including a DVD of these two works together with Maxwell Davies’ Miss Donnithorne’s Maggot. Alison enjoys working with young composers, and with the next generation of singers.

A stalwart of the new music scene, Ian Mitchell has championed the work of many composers, commissioning works for clarinet, and for Gemini (the chamber group he directs). He has made many recordings, including a CD with Alison Wells. He is Head of the Wind, Brass and Percussion Department at Trinity Laban Conservatoire of Music and Dance.

An advocate of contemporary music, Catriona Scott attended the contemporary performance and composition course as part of the Britten-­‐Pears Young Artist Programme. She has premièred and recorded many works written especially for her, incuding James Francis Brown’s Lost Lanes, Shadow Groves – a clarinet concerto composed for and dedicated to her. Catriona is Principal Clarinet of the London Contemporary Music Group.

A composer since early childhood, Judith Bingham (b. 1952) was born in Nottingham, and studied composition and singing at RAM, and with Hans Keller. Fossils and Monsters is the fourth piece written specially for Alison Wells. She is presently writing Ivor Gurney settings for Sarah Connolly and Tenebrae.

Colin Riley’s (b.1963) work draws on a range of elements including improvisation, new technologies, song-­‐ writing and large-­‐scale classical form. His work is impossible to categorize, embodying an integration of stylistic approaches. As an established, yet ever-­‐questioning figure within the contemporary music scene, he has cut an independent path over the last 20 years.

Christopher Hobbs (b. 1950) studied composition with Cornelius Cardew. He lectures at De Montfort and Coventry Universities. A double CD of his music was released by EMC. He is principally associated with Satie’s music – having given a celebrated performance of Vexations, with Gavin Bryars, and premiered Le Fils des étoiles.

William O. Smith (b. 1926) studied composition with Milhaud and Roger Sessions, and clarinet at Juilliard and the Paris Conservatoire. His dual career as c omposer and performer includes performing his own music, as well as being the front-­‐line member of the Dave Brubeck Quartet since the early 1970s.